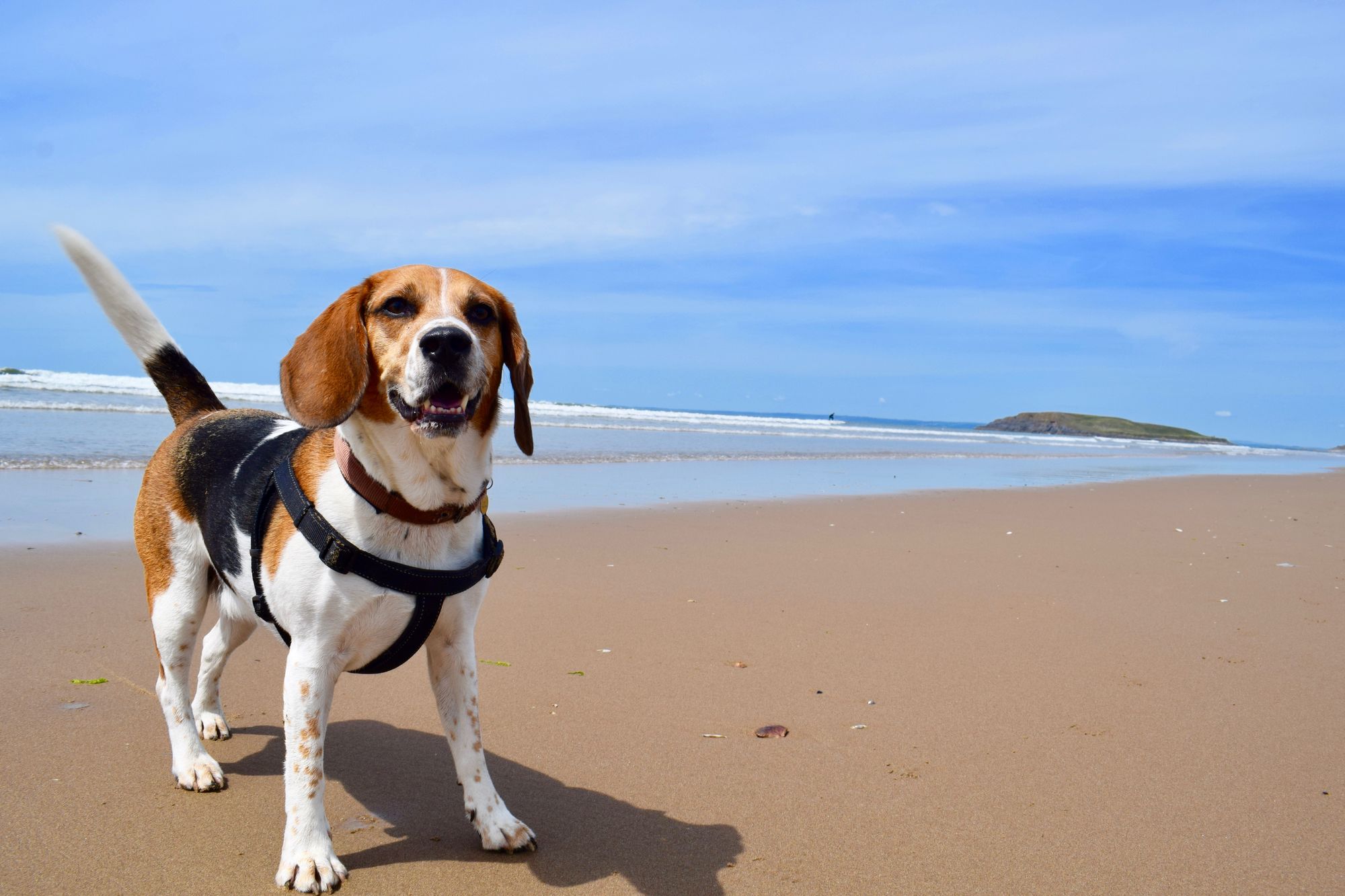 I started 2018 with precisely 2018 friends and approaching the end I am nearing 10,000! What a wonderful bunch you all are. A beagle never thought he’d have such a lot of good friends!

January started with a birthday bash – my own! This year I turned 5 and despite my suggestion to have 5 birthday cakes to celebrate this momentous occasion I got just one candle stuck in my regular dinner. Mum really should make more of an effort. I did like my hat though.

Training for our Muddy Dog Challenge began in earnest

and fun walks were had up Sugarloaf, at Castell Coch, in Wentwood and I introduced Denzil the fish to all my friends.

On into February we celebrated pancake day

and we took a trip up north to visit Gran and Grandad. Their house is always great fun and we are allowed to eat many more things than we are at home, including the bird food.

Mum says that isn’t correct but that Gran is just very accepting of our naughtiness and lets us get away with more. Gran rocks.

Fun times were had walking the coastal path and crossing the top of Twmbarlwm where Dad and I came across a snazzy set of wheels.

Other fun walks occurred in my local woods and a beagle nearly froze his ears off in the coldest snap a chap has ever known. Thank goodness for my sheepskin sleeping bag.

Then came the snow. And my biggest adventure to date. Suddenly in March the world went very cold and white. Off we went to the woods where it was untouched and fluffy and I decided to go off on a 2 hour jaunt with the rabbits.

Mum and Dad seemed less excited by my adventure so March is also the month I introduced my new friend The Tracker to everyone. A clingy sort of fellow, he comes with me everywhere and has some kind of psychic connection to Mum’s phone, meaning she has a nasty habit of turning up in the most unexpected of places and spoiling all my fun.

In April the white stuff disappeared and out came the hottest sun a beagle had felt on his fur for a while. The first beagle bash of the year happened and a gigantic tub of water, disguised cunningly as a table, fooled a beagle into taking a very deep dive. All of my friends watched as I swam heroically to shore and I’m pretty sure everyone was highly impressed by my fish-like abilities.

On into May the hot stuff continued. Many a dip was taken in my lake and people started eating outdoors on blankets again. So conscientious of people to provide food for me while out and about.

June was a busy month. First we found Dudley playing chicken with cars and buses so back home he came with us from our walks.

After eating my schmackos Mum took him away again to reunite him with his people and I took a well earned nap to recover from the horrific sight of my schmackos being devoured by someone other than me.

June is also Gran’s summer fete – a wonderful occasion with open bins, lots of other dogs and unsuspecting people wandering around with hot dogs and snacks, just ready for a beagle to pounce. I met some sheep, entered a dog show and didn’t win, stole some treats and had a lovely nap under the flower stall.

Soon after this, I visited Mum’s office for National Take Your Dog to Work Day. Now don’t get me wrong, I met some lovely people and had some tasty snacks.

But why Mum chooses to go and sit there every day rather than at home with me and Chilli is anyone’s guess. Mum says I was very well behaved, despite climbing over someones desk, and I have been told I can visit again. I don’t see what all the fuss is about.

On into the summer, the number of beagling incidents were fewer in number as a beagle sweated under his fur, but the quality of beagle-ism was definitely higher as I had the mother of all raids on the kitchen bin.

My first holiday of the year took place in Norfolk where we found a fabulous house and a garden that made me do some very un-beagle like dashes around. To counteract this energy, some very beagle-like naps were had thanks to the plentiful sofas.

We celebrated Chilli’s birthday, watched England crash out of the World Cup and spent a lot of time in the hot tub.

The highlight of the holiday came when I got to drive a boat.

Once I had mastered the controls I showed Dad what to do and as we sailed through the Broads I was able to indulge in a few mid-trip naps.

Essential to save energy when out on the water you see.

Into August and the dreaded day arrived. Battersea Dogs Home’s Muddy Dog Challenge. Mum had been bleating on about this all year, making me raise money for dogs ‘less fortunate than me’. I should say any dog not forced to run through mud is more fortunate than me but there you go. To keep Mum happy I obliged, and you know what, I rather enjoyed myself. I successfully completed all challenges, raided some snacks from a kindly but gullible volunteer, completed the course looking cleaner than Mum and made everyone very proud of me.

My annual trip to the vet occurred with the usual fat shaming comments, despite my athleticism the week before.

Thankfully Gran came to see me soon after, introducing me to some delicious chicken wrap snacks so I ate away the vets hurtful comments and decided that food is always the answer to a problem.

On into the autumn I successfully dealt with a dinosaur invasion

and lost count of the times I had to assist Mum in the kitchen.

Then we decided to holiday once again, this time taking Gran and Poppy with us. Chilli and I became Reservoir Dogs while we visited the Elan Valley and we enjoyed several potters around Hay on Wye. Gran didn’t seem very keen on letting me share her bed so I had to slum it with the ‘rents but I was very appreciative of the open fire and open plan nature of the kitchen. Made food raids far easier and far more comfortable.

The ability to power nap in between raids really helps with the energy levels.

and have enjoyed some cracking walks and snoozes. I have visited both grans, one grandad and an uncle Tim and have been possibly the best house guest anyone has ever seen.

The annual Christmas beagle bash went off with a bang

and I got to meet Santa, show off my athletic prowess on the agility equipment

and raid the raffle stand. My own Christmas decorations have appeared and I keep a constant eye under the tree where tasty treats and presents are known to appear.

Mum and Dad have worked and worked and worked and there is mention of an impending house move. As long as my bed and my sofa come with me then that’s fine with me. There is talk of a big garden, an open plan kitchen lounge and more snoozing space. There is also talk of an oven ‘too high for a beagle to reach’. Despite this negative point, I am trying to stay positive. I’m sure with a little planning and analysis I will be able to work out a route from the work surface to the oven, so have decided to embrace the change. Plus, the dishwasher will be coming with me so all is not lost.

To see out the year I have upgraded my outfit to a tweed collar, complete with dog bone accessory.

I really could not be looking sharper right now.

What a cracking year. Here’s to an even more snooze filled, beagly 2019!